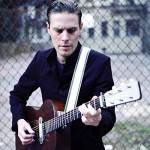 Matty Charles (The Poet) is an American singer/songwriter and guitar player who writes classic, economical songs that channel iconic balladeers like Hank Williams, Leonard Cohen, and Johnny Cash. His music is deeply rooted in traditional American folk and country styles, exploring themes of love, loss, and longing. In the early 2000s, Matty Charles and his trio the Valentines were at the forefront of New York City’s Americana music renaissance. They played a very popular residency for several years at Pete’s Candy Store in Brooklyn, a venue The New Yorker has called “one of the most respected listening rooms on the indie-folk set.” In addition to releasing several full-length albums, in 2007 Charles composed a soundtrack for Sal Interlandi’s dark and moody film Charlie, which featured Valentine’s drummer DJ Mendel in the lead role. The work Charles did for the film was the inspiration for his 2008 release Ring the Dark Atlantic, which incorporated recurring themes and instrumentals from the film as well as songs of the more traditional form. In 2010 Matty Charles & the Valentines performed as themselves in the film Meanwhile, by award-winning director Hal Hartley (Henry Fool, Book of Life, Faye Grim). Matty Charles has toured in the United States and Europe. He currently resides in Portland, Oregon. “Instead of songs about sadness that leave listeners feeling alone, Charles’s lyrics and smooth guitar riffs wrap their arms around his listeners and hold them tight.” (SF Reporter) www.mattycharlesmusic.com 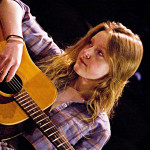 Sylvie Davidson (The Lady) is a graduate of Knox College in Galesburg, IL and a native Seattlite.  An actor and singer/ songwriter, she has worked extensively in the Pacific Northwest with ACT (Dr. Jekyll and Mr. Hyde, A Christmas Carol), Book-It Repertory Theatre (Emma, The Art of Racing in the Rain, Great Expectations, The Highest Tide, Night Flight), Seattle Children’s Theatre (Getting Near to Baby), Island Stage Left (The Tempest, As You Like It, Winters Tale), and New Century Theatre Company (Tails of Wasps).  Most recently, she created the role of Becca in the world premier production of Stephanie Timm’s “Tails of Wasps” with NCTC.  Four years ago, she met the love of her life, Trevor Wheetman, while working on the first iteration of Lonesome Traveler.  She now lives with him in Nashville, TN where they are pursuing songwriting and looking forward to soon becoming one of the many married couples brought together by folk music. 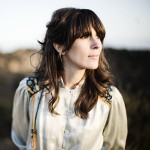 JAMIE DRAKE (The Activist) A songwriter for a father, a Pentecostal church upbringing, and moves from place to place; these are all elements of Jamie Drake’s unique brand of folk music. Beyond her unique vocal tone and songwriting, anyone who knows her or hears her sing recognizes something real and essential about her life in her songs. She shares a little bit of the heartache she’s experienced and hopes it will gives others courage to get through it, too. Jamie’s interest in music began as a musical theatre performer in high school and continued with training in New York at the America Musical and Dramatic Academy. She recorded her first album “When I Was Yours” in 2010. After a yearlong residency at Crane’s Tavern in Hollywood, Jamie went on the road opening for Tim Robbins and the Rogues Gallery Band. Her newest endeavor “Nobel” is available on iTunes, along with her solo album. www.jamiedrakemusic.com 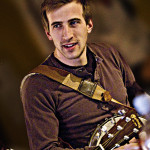 Justin Flagg (The Lonesome Traveler) is thrilled to be sharing the stage again with such a wonderful group of actors and musicians, having been with Lonesome Traveler since it’s world premier in 2011.  Justin studied acting at the Royal Conservatoire of Scotland and has appeared on stage and screen throughout the US and UK.  He recently received a degree in Social Policy from The New School, and he is currently working as the Communications Liaison for New York State Senator Liz Krueger, representing the Upper East Side of Manhattan.  Justin has released two albums and appears regularly throughout NYC and beyond with his alt-folk band, The New Students (www.thenewstudents.com).  Thanks to friends, family, and B.  For Pete, who’s music surrounded hate, and forced it to surrender.

Sam Gelfer (Musician) is a musician, educator, conductor and arranger from Brookhaven NY.  Having started his teaching career immediately after his graduation from SUNY Fredonia, Sam has maintained a busy schedule of performing with fellow cast member Justin Flag in their folk band The New Students.  The band has recorded and released two albums-plus one EP currently in production-comprised of original music inspired by American folk styles, bluegrass, and the 21st century.  In addition to keeping up with The New Students’  performance schedule in New York City and Long Island, Sam also hones his classical bass chops in Long Island’s newest chamber ensemble, the New Inlet Chamber Orchestra.  As a co-founder of the ensemble, Sam arranges many community outreach concerts which are always free and open to the public.  Sam is very excited to be making his off-Broadway debut as a member of the cast of The Lonesome traveler. 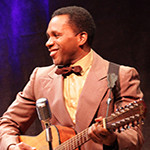 ANTHONY MANOUGH (The Man) has been nominated for the Helen Hayes Award and L.A.’s Ovation Award. His NY credits include Disney’s The Lion King as Simba and Bonsai, and Jesus and Judas in Jesus Christ Superstar. Rubicon Theatre credids include Man of La Mancha and Songs for a New World. Most recently, he appeared in Much Ado about Nothing for Shakespeare Center/L.A, as Andre in Ain’t Misbehavin’ at Cabrillo Music Theatre, and as Britney Spears in We Will Rock You in Las Vegas. 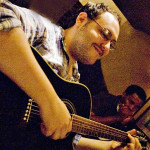 JENNIFER LEIGH WARREN (The Muse) is happy to return Off-Broadway, her last performance there being the original Crystal in Little Shop of Horrors at the Orpheum Theater. Broadway credits include Big River (with the song “How Blest we Are” written for her by Roger Miller), Marie Christine (original Cast). She performed her NAACP Theatre Award-nominated performance as Julia in Having it All at The Laguna Playhouse and NoHo Arts. Other regional credits include Sir Peter Hall’s Shakespeare Repertory Company at the Ahmanson Theater, The Education of Randy Newman, Hair, Kismet, Little Rock, Princess and the Black-eyed Pea. TV credits include Pretty Little Liars, Lipstick Jungle, ER, Scrubs, The Game, All My Children. On The Tonight Show with Conan O’Brien, Jimmy Kimmel and CONAN, she performed with OK GO, Lisa Loeb, The Kills, Moon Taxi, Trombone Shorty. In Denmark, she performed with Al Jarreau; and Big River in Japan (in Japanese!). Film credits include Valentine’s Day, Dear God, Grace of my Heart, The Crossing Guard, Sour Grapes. She recently performed with Broken Bells at the Orpheum Theater (in LA). Other awards includeBroadwayWorld Awards for both Songs of Dame Shirley Bassey (directed by Richard Jay-Alexander) and the Lythgoe family Panto Cinderella Christmas in the same year, as well as numerous L.A. Ovation Award nominations and win,Backstage Garland Award and the Heiman Creative Arts Award at Dartmouth College.  She served for two terms on the Dartmouth College Board of Overseer for the Hood Museum and Hopkins Center for the Arts and is a proud AEA, SAG/AFTRA Union member. For Mom, Mike, Wendy & Joel! www.jenniferleighwarren.com 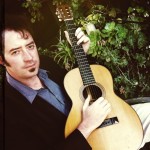 TREVOR WHEETMAN (Musician/Associate Musical Director) is the sort of chap who believes in the mystical power of music which can heal wounds, open minds and end wars. As a songwriter, he strives to create music which will be sung in showers and dive bars everywhere. He owes Rubicon a great debt of gratitude for their support, and, for introducing him to his sweetheart Sylvie! Keep your eye out for them in Nashville, where they have moved to pursue songwriting.